Let's make
some together.

Let's get this ball rolling! Complete the fields below
and we'll be in touch within one business day.

What should we call you?

How can we get in touch?

What are you looking for?

Facebook Ad costs are plunging due to COVID-19. What does this mean for your business?

Facebook Ad costs are plunging due to COVID-19. What does this mean for your business?

“When written in Chinese, the word 'crisis' is composed of two characters. One represents danger and the other represents opportunity.” - John F. Kennedy

It’s odd to think of a global health crisis as a business opportunity. Here in Australia, we are at a crossroads with jobs returning in some states, and the average day-to-day returning to normality. Average disposable income is on the rise and unemployment is starting to fall from record highs in July and August. Digital media buying costs however, have not begun to return to pre-COVID levels, meaning there’s never been a better time to advertise on social media.

2020 has brought changes in the way the modern marketer approaches strategic problems, particularly because of fast, drastic changes in the digital marketing sphere and how people consume online.

We are seeing a new type of online consumer: a consumer that is driven by fear or anxiety, and more inclined to panic buy, or impulse buy, despite the fact average income has hit record lows and unemployment has skyrocketed. We are also seeing a consumer that has increasingly shifted their daily life into the digital space through online shopping, messaging and communication, business, video games and even online sex. If you can think of it, it exists on the internet, and you can probably pay for it.

For many digital marketers and small businesses, the global pandemic has also led to significantly decreased costs in the delivery of social media advertising. CPM’s (Cost per 1000 impressions) have fallen drastically, even up to 30%, which has presented an opportunity for businesses with budget to continue advertising during the pandemic.

Our team at MITP has seen this decrease in ad costs occur in our own advertising accounts. While this presented a great opportunity for clients who were willing to stick it out and keep advertising, it’s a sharp reminder that many businesses have had to cut their advertising costs, and that often begins with their social media budgets.

Falling ad costs are also a bleak reminder that many businesses have stopped advertising altogether, and had to shut up shop completely. Online travel businesses have been hit the hardest with a decline of nearly 50%.

How Much Have Ad Rates Fallen

Through analysing a sample of social media ad accounts across diverse niches and industries over 10 months, MITP observed in-house ad delivery costs. The below graph depicts our average CPM and CPC (Cost Per Click) in Australian dollars (AUD) across high spending Ad Accounts from September 2019 to August 2020. 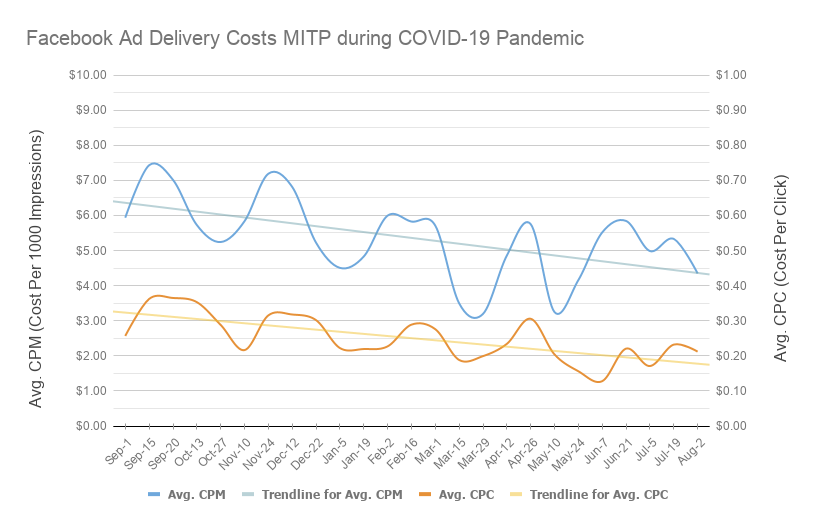 The trend presented here is enough to show a significant decrease in ad costs from our agency’s perspective. The average CPM has roughly fallen from $6.40 down to $4.40 AUD, and the average CPC fell from roughly $0.34 to $0.18 AUD.

According to the Wall Street Journal, CPM rates fell by 25% between February and March for American digital marketing agency Wpromote LLC, who claim to manage more than $130 million in annual ad spending on Facebook. CPMs also fell by 20% at 4C Insights Inc., an American marketing technology company.

YouTube Ads, part of the Google Ads platform, also saw a 15% to 20% drop in CPM’s from February to March.

Being an Australian agency, MITP primarily advertises in Australia, however Australian digital marketers are still competing internationally for ad space and falling costs reflect that. This is a country that has been relatively unaffected by the COVID-19 pandemic compared to the rest of the developed world, but has still felt a strong impact from COVID-19 on an economic level, and advertising tends to be impacted first

Why Have Ad Rates Fallen

But why have Facebook ads become so cheap? It’s simply a case of Supply and Demand. COVID-19 has led to ad budget cuts for many businesses. Less advertisers spending digital media dollars means less ads being served, and less accounts bidding for the same ad space, leading to cheaper ads for everyone.An increase in users in the digital space, whether that’s due to boredom relief at home and more online workspaces, has likely also led to more available impressions on social media.

Digital media space is much cheaper than traditional media, like newspaper, print and TV, so it makes a lot of sense to start up your social media campaigns now if you haven’t already.

So what are the best types of Facebook ads to capitalise on these reduced costs?

Focus on Conversion and Traffic ads. You will serve more ads for a slightly cheaper cost and this will likely lead to a better return on investment, as you may have a better chance at reducing your Cost per Conversion overall.If you are simply in the market for the cheapest CPM, the best placements are Instagram Stories and the Instagram Feed. Instagram placements tend to deliver more impressions for the same cost due to the crowded ad space of Facebook, yet a high number of users on Instagram. You could even see a CPM fall as low as $0.50 per 1000 impressions on Instagram Stories, if the ad creative is strong enough.

When considering your own business you might also think about the following before starting a campaign:

If you can answer those questions, then you are well on your way to capitalising on falling social media ad costs. It might be a long while before those costs return to pre-COVID-19 rates, so seize the opportunity while you can.